The group of characteristic features of an individual or a community that defines it from the rest is the awareness that a person is him/herself different from the others. The community identity can be seen through its history, its tradition, its art and its culture. Carlos Gardel was the architect of the emerging Argentina of the 20th century, a huge part of such awareness, and was able to transmit the pride of his identity and history to the people.

Carlos Gardel Foundation was born with the goal of keeping Carlos Gardel’s legacy and figure alive, offering the current and future generations a broader knowledge of who was the greatest icon of the 20th-century popular culture, and whose work was included in UNESCO´s “Memory of the World Program” in 2003, thus giving universal recognition to his voice.

The Carlos Gardel Foundation, as legal keeper of the artist´s heirs, has been established to preserve the spirit of his legacy and to spread his entire work as an official seal and quality guarantee. In order to do so, the Foundation safeguards an important documentary, photographic, film and dis archive that, by the use of the new technologies, is being remastered and reedited to make it available to the world.

Our mission is to spark a sense of national identity and love for our cultural heritage among the current and future generations through the figure of Carlos Gardel.

Our vision is to safeguard the future of our society by protecting and spreading the history and identity of the Argentine people.

Heritage and its Successions

So far, the story of Carlos Gardel, and his artistic legacy, has passed through several generations, sustained by a strong sense of Buenos Aires identity and with an international prominence reached by very few of his contemporaries; but there is an inherited succession, that we will herein explain:

On October 27th, 2000, through the cession of rights, Mrs.Nuria Eulalia de Fortuny de Cortada, donates her daughters Nuria Eulalia Andrea Cortada de Fortuny and María Ana Inés Cortada de Fortuny all the property rights and actions inherited from those rights related to all the goods and material and non-material objects owned by Carlos Gardel, his mother Mrs. Berthe Gardes and her heirs, Armando Vicente De Fino and Mrs.Adela Blasco, all of which the assigner is the sole and universal heir.

Through a cession of rights dated August 17th 2018,  Nuria Eulalia Andrea Cortada de Fortuny and María Ana Inés Cortada de Fortuny assigned the property and action rights on the things, goods, and material or non-material objects owned by Carlos Gardel in his lifetime, his mother Mrs. Berthe Gardes and her successors  Armando Vicente De Fino  to  Walter Nelson Santoro, president of the Carlos Gardel Foundation  completely free of charge, with the strong commitment to safeguard and revalue Carlos Gardel’s memory and legacy for future generations.

In compliance with such commitment, Carlos Gardel Foundation is created to fulfill those aims, becoming a starting point of a new story.

Carlos Gardel is an active part of our life, either conscious or unconsciously: anyone can recognize the phrase “I´m Gardel or You´re Gardel” or “go sing to Gardel” and, at the same time, ignore the story of this outstanding artist and his contribution to our country´s cultural history.

Nobody can deny the relation between Buenos Aires, tango and Gardel. Much less ignore that anyone travelling to Buenos Aires or to Argentina will go and see tango dancing, visit the museum of tango, the house or grave of that person who established tango in the world, and therefore, in our culture.

Since the early twentieth century, a very young Carlitos has cultivated an original repertoire of native songs, most of them stemming from his inspiration. He became known in the area of Abasto and thanks to his natural talent and his constant desire to learn and hard work, he was able to master the job, until becoming one of the most important and innovative singers in the history of music.

On June 24th he died at the peak of his career in a plane crash in Medellin, Colombia. Homage to his figure, far from vanishing, grew over the years and nowadays millions of fans from all over the world protect his legacy and pass it on to the next generation.

Books devoted to his art and biography have been published in every language, and he is among the most studied popular music personalities. There are about 17 million references on him on the Internet.

He set a record never beaten by filming seven movies in Spanish for the European and North American industry in a time where subtitles and dubs not even existed.

He left more than a thousand albums, another impressive record if we consider how hard recording was by then, nowadays considered cult recordings due to their unique quality, even those shots the demanding singer had discarded.

All his movies are cult movies that have inspired world-class directors and actors. Besides being a huge singer and actor, Gardel was a first-rate composer. He composed the melody for “El día que me quieras”, considered one of the most romantic songs in Spanish and with more versions of all times. Compositions such as “Por una cabeza” [For a Head], “Volver” [Come Back], “Lejana tierra mía” [Faraway Land of Mine], and plenty others of his authorship have become universal referents.

He introduced some singing and composing techniques that are now source of inspiration to millions of singers, some of great importance such as Bing Crosby, Frank Sinatra, José Carreras, Joan Manuel Serrat and many others.

In 2003, Gardel’s figure and all his work were declared Cultural Heritage of Humanity by UNESCO.

His voice is considered one of the best of all times, on a par with Enrico Caruso, María Callas and Edith Piaf.

The relevance of Gardel in the Argentine culture

At the dawn of the twentieth century, Argentina was known as the “grain barn of the world” due to its huge volume of agricultural exports. Culturally speaking, there was no concrete reference to our country. There were no popular artists that stood up abroad. Although there were some Argentine musicians and singers wandering around Spain and France since de 1920s, none of them went beyond the venues where they performed.

Until Carlos Gardel arrived. In September, 1928, he made his debut in Paris with immediate and overwhelming success. At that time, Paris was a trendy city, where the most prominent people in the world gathered around the tables of the night venues to watch the artists perform. Carlos Gardel’s voice and magnetic charm captivated the audience, selling out tickets to listen to the Argentine singer.

He was a friend of Charles Chaplin, Luciene Boyer, the Mistinguett and Maurice Chevalier. They all praised his art, thus quickly becoming the most famous Argentine in France. Thanks to his charisma and professionalism, the popular Argentine music was spread, and with it, our culture and identity. Gardel became, as the journalist Roberto Casinelli once said, “Our best ambassador across the world”.

In 1933 Gardel travelled to New York with the intention of filming more movies. Paramount was interested in our singer and finally managed to have him sign a contract for the making of two movies, or maybe four, with participation in the broadcast profits, never before considered for a singer. With this contract, he became the highest paid foreign artist of the time.

The four movies that he finally filmed in New York were incredibly successful in the USA, Europe and Latin America. The fervor was such that the audience packed the shows and at their strong request, the movie was rewound so that they could hear him sing again. Eddie Cantor, Bing Crosby and Al Jonson, the three most important North American singers of the time, had warm words of praise about his singing and interpretation.

Gardel has always been the most prominent Argentines artist. He was a milestone in our history, because he was the first one to take our music, identity and culture to the world. After his tragic death in Medellin everyone wished they were Gardel since it was him who showed the way. Today on the streets you can still hear, “Who do you think you are? Gardel?” as a way of symbolizing the unreachable. Or “You are Gardel” to highlight a person´s success. 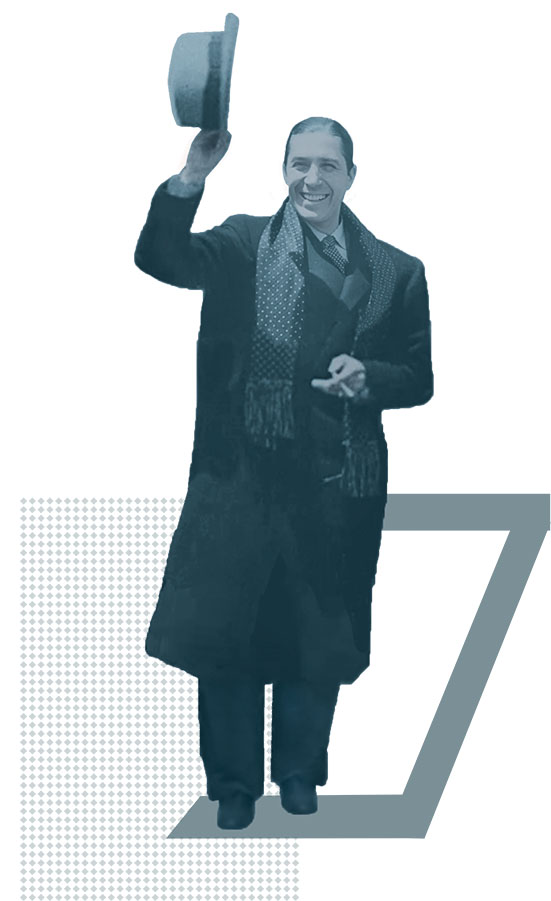